Talon have risen from humble beginnings to become one of the most successful theatre touring shows in the UK and we certainly have had some amazing highlights in that time. Who would have thought that back in September 1997 when Peter and I first began the process of forming Talon that we would end up in the wonderful place that we find ourselves today. Who would have thought that in 1994 whilst Lloyd & Anderson were in the recording studio that a fifteen year old tea boy called Jonny Miller would eventually make his Talon debut at the dawn of a new millennium and mature into a truly world class performer, and ultimately be joined on the Talon front-line in 2003 by the towering talent of Tony Vegas. Then in 2008 we would acquire the awesome ex-Wishbone Ash man Keith Buck only to witness two years later a young fresh faced drummer called Charlie Kenny stroll into the audition room and blow us all away; and finally, who would have thought that in 2014 fate would announce the arrival of Jonny’s little brother and keyboard maestro Freddie Miller and complete ‘The Magnificent Seven’.

Talon have always taken the responsibility of our mission statement very seriously and in essence that mantra remains a simple one… “To faithfully re-create the music of the Eagles with honesty, respect and reverence”.

Peter and I have certainly taken some calculated risks over the years and I truly believe that if we hadn’t done so then we would not be enjoying the stunning success that we experience today. Like the decision in 2001 that we should look after our own business affairs and promote our own tours, or to make incredibly tough and heart wrenching decisions to change personnel when faced with the certain knowledge of losing long and valuable friendships, or armed with Anni’s brilliant ‘project manager’ skills, of hiring a hotel to celebrate our ‘10th Anniversary’ or the audacious and scary decision to charter an entire cruise ship for our ‘15th Anniversary’ and of course to possess the determination and enthusiasm to maintain the courage of embracing change year on year by re-formatting the show, re-inventing the wheel and re-investing financially to ensure that Talon continue to evolve, prosper and keep moving forward.

Unfortunately we never had the honour of meeting the late great Glenn Frey, but we did get to meet his best friend and hit songwriter of ‘Peaceful Easy Feeling’, ‘Already Gone’, ‘The Girl From Yesterday’, ‘It’s Your World Now’ and so many other Eagles classics. In December 2009, Anni convinced me to cancel Christmas, go to San Diego California and just make it happen. So we did just that and remarkably in April 2010 the legendary Jack Tempchin flew over to England and appeared as our very special guest for three memorable nights.

Talon have experienced some exhilarating highs, some devastating lows and worked very hard for many years so it was to be a massive thrill when, in the summer of 2016, we were nominated in seven different categories at the ‘NATIONAL TRIBUTE MUSIC AWARDS’ winning ‘OFFICIAL NO. 1’, ‘MARKETING & PR’, ‘LIFETIME ACHIEVEMENT’ and ‘BEST BAND’ (in all categories). The following spring on the 22nd April 2017 our ‘20th Anniversary Tour’ opened to a sell-out crowd on home soil at the beautiful Birmingham Town Hall closing in London’s west-end on the 27th January 2018 at the prestigious Cadogan Hall in Chelsea. That west-end sell-out would be a watershed moment that represented just how far Talon had actually come and was twenty years to the day that we had played our very first gig at a music pub in Birmingham on a wet Wednesday night to three men and a dog for two quid on the door. Now that’s one giant leap! Our record breaking ’20th Anniversary Tour’ was later to be recognized in July 2018 by our industry at the ‘N.T.M.A.’ by winning ‘BEST THEATRE TOUR’. 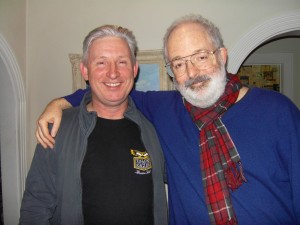 Yours truly with the legendary Jack Tempchin 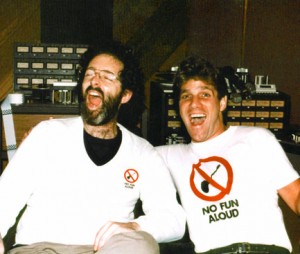 Glenn and Jack sharing a joke back in the day